A centrifugal pump converts the input power to kinetic energy in the liquid by accelerating the liquid by an impeller. The energy created by the pump is kinetic energy according the Bernoulli Equation. Fluid enters the pump through the eye of the impeller which rotates at high speed. The fluid is accelerated radially outward from the pump casing. A vacuum is created at the impellers eye that continuously draws more fluid into the pump. 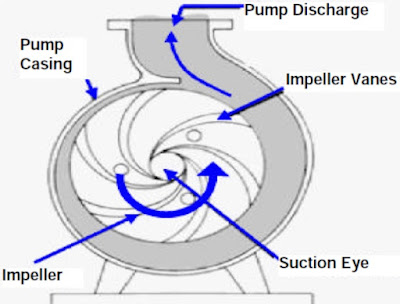 Most pumping applications use centrifugal pump which operate within ranges of head and velocity. For handling high-head or high-flow applications may use pumps in series or parallel. When running in series, the heads are added, and the total capacity is equal to the pump with the smallest capacity. In parallel, the capacities of the pumps are added, and the head of all pumps will be equal at the point where the discharged liquids recombine. Parallel pumps may become an option due to some reason, for examples to reduce the cost because two smaller pumps may cost less than a larger one, to increase the size of an existing plant, or the process requirement that need to vary the capacity. It is important to know that pumps operated in parallel must have similar head characteristics to avoid operating problems.

Pumps that operate continuously in critical service should have a standby pump that can run immediately if the main pump failure. Auto-start provisions may be necessary to start the standby pump. This can reduce plant shutdown and losses because plant stop running.

The selection of pump is first calculating the pumping conditions and then decides which type of pump to use for the application. The search for a proper pump begins with the requisitions, data sheet and vendor selection followed by evaluation, purchasing, delivery and installation.

First of all, engineer should specify process requirements which consist of the conditions and physical properties of the liquid (the flow rate, pressure, density and viscosity). The head depends on the density and viscosity of the liquid and the flow rate determines the capacity of the pump. Required flow rate is usually determined by the material and energy balances with design margin typically up to 25%, this margin is added to account for unexpected variations in properties and conditions, or to ensure that the plant meets their performance criteria. Minimum flow protection is often added as continuous circulation. If the required flow rate fall in the low range for centrifugal pumps, so a minimum-size pump rated for continuous service is specified, and then extra pump capacity is circulated from the discharge to the source.

Design pressure is determined by considering maximum pressure of the source, maximum head developed by the pump (shutoff head), maximum static head of the fluid in the pump suction line, maximum pump operating speed (variable speed drives), and possibility of operator intervention during an upset.

The term head can be described as the vertical lift in height, measured in feet or m of water, at which a pump can no longer exert enough pressure to move water. At this point, the pump may be said to have reached its "shut-off" head pressure. In the flow curve chart for a pump the "shut-off head" is the point on the graph where the flow rate is zero.

Following are some description for different types of pump head:

- Total Dynamic Head is total head when the pump is running

- Static Suction Head is head on the suction side, with pump off, if the head is higher than the pump impeller

- Static Suction Lift is head on the suction sides, with pump off, if the head is lower than the pump impeller

The head h is the most commonly used measurement of the energy at any point of the system and defined as:

hlosses  = total losses at suction and discharge side (m)

It is important to understand that the pump will pump all fluids to the same height if the shaft is running at the same rpm. The only difference between the fluids is the amount of power it takes to get the shaft to the proper rpm. The higher the specific gravity of the fluid the more power is required. Furthermore, it is better to measure the energy of a pump as head, rather than pressure because the head produced by a pump will remain constant at a given flow rate and speed, even though the pressure differential and power requirements vary.

Fluid properties have a significant impact on the head, as density and viscosity increase, so will the amount of work needed to drive the pump. The engineer must specify not only the normal values for density and viscosity, but also the maximum values to encounter during extreme situations, such as startup, shutdown or process upsets. Furthermore, the engineer has to determine the maximum operating temperature, and whether the fluid may contain suspended solids or dissolved gases.

The other important thing regarding to pump is cavitation. Cavitation occurs when the suction pressure of the pumped fluid drops below its vapor pressure, leading to the formation of vapor bubbles. As the fluid becomes pressurized again in the pump, these bubbles implode, leading to pitting of the impeller and other pump components. In addition, since vapor has a lower density than liquid, cavitation leads to a reduction in the pump capacity and efficiency.

The net positive suction head (NPSH) is a measure of a liquid to its bubble point (or vapor pressure). The available NPSH (NPSHA) is given by:

The available NPSHA is determined by the system and it must exceed the required NPSH (NPSHR). NPSHR is the amount of absolute suction pressure that the pump manufacturer specifies to be made available to the pump inlet so as to avoid damaging levels of cavitation. NPSHR characteristic is determined by the interaction of the physical geometry of the pump inlet, inclusive of the casing, impeller, and all associated wetted parts within the inlet field of flow.  The value of NPSHR is determined through performance testing at manufacturer, and then Suction Specific Speed (S) is calculated using rpm, NPSHR and Q (use half of the flow for double suction impellers) as follows:

Pumps with high suction speed tend to higher vibration, which may cause seal and bearing problems, when they are operated at other than design flow rates. As a result, some end-user restricts suction specific speed, and a widely accepted maximum is 11000 or 9500 except for high speed pump usually up to 24000.

Sometimes there are some problems with NPSHA and NPSHR and engineers have to increase NPSHA. There are some options to increase NPSHA. Increasing the source pressure or reducing the fluid vapor pressure by cooling is almost not feasible, but there are two process variables remaining can be adjusted that are the static head and friction losses.  Static head can be raised by some methods (if possible) by raise the elevation of the source point, lower the elevation of the pump inlet, raise the level of fluid in the suction vessel. The possibility of these changes must be studied to know the availability and feasibility.

Friction losses can be reduced either by increasing the diameter of the pump suction piping and/or reducing the equivalent length of the suction line. In a new plant, friction losses should already be minimal, so raising static head is more viable, but in existing plant reducing friction loss can be considered for suction lines.

Pump manufacturer also has some options to reduce the NPSHR, which include using a larger, slower-speed pump, a double-suction impeller, a larger impeller inlet (eye) area, an oversized pump and an inducer.

The other parameter that should be defined is Brake Horse Power. Brake horsepower (BHP) is related to the flow rate Q (m3/hr), total dynamic head TDH (m), specific gravity (Sg), and efficiency η:

In this case, engineer should assume the efficiency of the pump, because the actual efficiency is set by pump manufacturer after performance test is done. In general, efficiency varies from a low of about 10% for a small centrifugal pump, to a high of 80% for a large pump. The information from vendor within the bidding stage based on shop tests of previously built pumps of the same model and size. In the mechanical data sheet, engineer usually state only the hydraulic power (not consider efficiency) and let the vendor to specify the Brake Horse Power (BHP).